The Thyl is an art gallery established in a historic house in the heart of Brussels. It allows artists and designers who wish to show their work there to welcome their customers and friends in an authentic setting. They can stay in conditions similar to those that gripped the 19th century small industrious middle-class.

The gallery is housed at 14 rue des Eperonniers

This street is parallel to the south side of the Great Market. It is between the St. Jean square and the Marché aux Herbes square.

This little house (4x5m, 2 floors) is a few minutes’ walk from Central Station.

This railway station provides access, to Zaventem International airport in the North in just quarter of an hour, and in a few minutes to the South Station in the South, a hub for the high-speed trains connecting Brussels to Paris, Amsterdam, Cologne and London.

It is not possible to mention all the museums, cultural sites (Opera, Fine Arts, the Royal Library, the Cinémathèque, theaters …), Schools (the Royal Conservatory of Music, the School of Fine Arts, …), the Convention Center, restaurants, cinemas located right next because they are so numerous.

At one end of the street the first University Medical School of the city was opened by Joseph II in 1788 at Saint John’s hospital. Its activity will continue until its demolition in 1848. 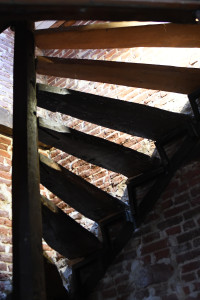 Its disappearance is accompanied by a real estate project from which remains the Bortier gallery (which still houses bookshops and art galleries) and Saint Hubert gallery (where many luxurious shops can be found).

Between 1790 and 1860, coal mining and the steel industry enabled Belgium to be the second biggest industrial power in the world, only preceded by The United Kingdom. 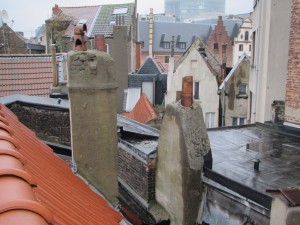 In 1815 the farmers from Waterloo and Braine surged towards Brussels, ruined by the mass grave organized in their fields.

In 1830, following religious incompatibilities, the former South United Provinces split from the Kingdom of the Netherlands to create Belgium.

The house at No.14 was built in 1820 on the site of a small garden which preceded another building of which only the front remains. A porch and a row of windows have been preserved. Openings for communication with the neighboring houses were built through the side walls. 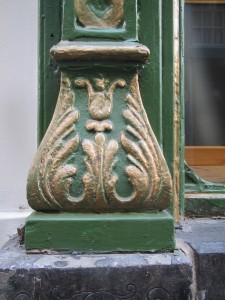 The building was first dedicated to the making of sculpted pipes.

Our predecessors were less well fed than us; their small size explains why we hit our heads when climbing the 1860 stairs furnished. The front shop window and the vaults to the cellar were placed that same year.

Quite close, the People’s House designed by Horta for the Belgian Labour Party was inaugurated in 1899 (POB was created in April 1885 at the Maison du Cygne, Grand Place). Its destruction in 1965 remains a heartbreak to many.

Advertising postcards kept in the City Archives are a reminder that jewelry were manufactured at No 2 and 20, records and other office equipment at No 3, knives at No 4 (this will later become a shop for luxury weapons), shoes at No 7, umbrellas and canes At No 10 and 20, artificial flowers at No 32, bronzes for buildings at the 65-67, 5. There was a wood dealer at No 16 ( artificial flowers will also be manufactured there at “In the perpetual Spring “), a hairdresser at No 18, a cloth and ties merchant at No 19, a printer at No 25, a hotel” Du Grand Café ‘ at No 24-26, a carpenter at No 29, haberdasheries at No 28 and 40. 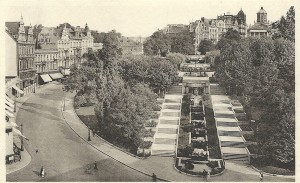 On the other end of the street, the St Roch district dating back to the Middle-Ages is replaced by the gardens of the Mont des Arts because of a universal exhibition in 1910. It is lined with artists’ studios, walk that some remember with delight. Under the pretext of another exhibition they will be replaced in 1957 by massive buildings.

In 1952 the work connecting the South, Central and North railway stations are finally completed, leaving in the center a dreadful scar.

At the same time the walk that led to the Bois de la Cambre (the Avenue Louise, Longchamps and Law) are transformed into urban motorways.

In 1944 Belgium initiates the Benelux which will lead to the European Coal and Steel Community in 1951 and later to the European Union, which elects to house its institutions in Brussels in 1965.

The NATO headquarters have also been based in the city since 1966.

Political turmoil in the 1960s has developed civil services in Brussels. 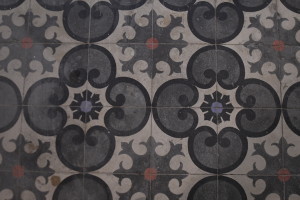 There was only one water point in the cellar together with a heap of coal. Each floor had its own fireplace.

A first renovation eliminated false ceilings and partitions added over decades. The rediscovered structure was rehabilitated.

From 1982-1998 a bookstore “the Bateau Livre” and its extension, the website “Cinérivage” (Françoise De Paepe) was a matrix for many moviegoers.

At No 57 the publishing house “La Jeune Parque” (Jacques Antoine) closed in 1975. After the death of André Roche in 1989, the theater “L’Ile Saint Louis,” ended its performances. The bookstore “La Proue” (Henri Mercier) at No 6 closed down in 1992.

At No 14 another renovation (front and chimney, as well as the roof that threatened to topple into the street) became unavoidable.

In subsequent years, unscrupulous tenants left the house ravaged together with years of unpaid bills. 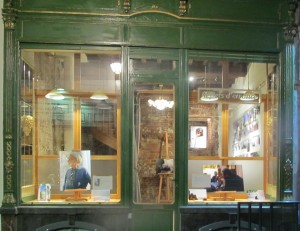 A home just like any shelter, is a tool. It provides a showcase opening on a city that welcomes visitors from around the world. It is a melting pot where ideas are catalyzed by meetings.

Access by car to the city center is not easy to say the least. Commuters often waste several hours to get in and out of it. Car parks are expensive.

A pedestrian area is growing gradually. It allows everyone to walk, look around, chat without being upset by nauseating backfiring cars. Eperonniers street is on its current threshold.

To accommodate the possible is to leave hope or a future. Imagination is born out of necessity. Survival often depends on finding an idea. Make a project rise from nothing was the hallmark of those creators who preceded us and remains the essence of us artisans. The artists more particularly share with us glances, impulses towards dreams and hope.

In this conjunction it seemed appropriate to offer this house as a place of welcome and freedom.

Thyl is the first name of the legendary hero created by Charles de Coster. His name “Uylenspiegel” means in Flemish, “owl and mirror” which, figuratively evokes the  Γνῶθι σεαυτόν at the temple of Delphi.       His story speaks of transgression, rebellion against that power which seems inevitable and that ultimately is these ideas collected along our roads sticking to our skin, forming screens, blinding us to life and its beauty.